Posted on October 28, 2012 by ninarocksadrien

Thanks to everyone that has called, texted and emailed to inquire about how we’re doing!

We are in Annapolis at a helix mooring off City Dock. We took down sails yesterday and plan to take down Bimini and dodger today or as as we lean more about expected winds. We have taken a hotel room a few blocks from the waterfront to store electronics and the Admiral if the Captain orders her departure from Dolphin. It is highly likely the Harbor Master will order the moorings “closed” when the winds get up to 40 MPH, in which case we can stay on the mooring at our own risk but have to keep the boat manned. When this happens the Captain will determine the fate of keeping the Admiral on board. For those of you that know me well, being asked to leave is not something I will take easily!

We are on one of five helix mooring in a row closest to the city dock said to be screwed 30′ into the ground. I say “said to be” because we are getting a lot of conflicting information from the Harbor Master and his summer helpers…very frustration! There are 2 vessels on either side of us; a 50′ Cat, “Thosyma”, Captained by a young couple from Germany; and a 45’+ heavy seaworthy catch, “Barn Owl”, from Curaco , Captained by a hearty French Canadian fellow that’s been living aboard for 19+years since his wife left him. He informed us he is looking for a First Mate, anyone interested? He’s lived through many a tropical storm/hurricane and appears to be taking Sandy with a grain of salt! We shared our cell numbers with both Captains and agreed to monitor VHF 68 if we need to communicate during the storm.

At this sighting there are two other vessels on mushroom moorings (said to be 100lb) in the field with us, a small Cape Dory from Ontario NY ( they run a small summer beach front Inn on Sodus Point!) and a 42′ center cockpit Irwin Catch.

Based on our position (see images below) we are fairly well protected by land and buildings from NNW winds through NNE but there is a bit of fetch for winds out of the E from across the inlet of the bay. Fortunately we don’t expect much of that.

There is conflicting info about storm surge. The Harbor Master says no surge is expected as the winds are expected out of the NNW thru NNE however trucks dropped sand in Ego Alley yesterday so folks could bag and carry. The water level in this area is very close to street level so several of the sewer drains over flow at a typical high tide. And most of the docks around us are fixed. Seems strange given the regular flooding this area is prone to. Like in New England the Governor has declared a SOE and everything is closed tomorrow and Tuesday.

The Captain added a 2nd pendant line and chaffing gear this afternoon. As of this moment we are resting comfortably but a bit nervous with anticipation. Its been a “hurry up and wait” game. Temps outside are around 55 degrees with a gentle rain and 65 inside, blowing about NNE 14-17kts. While the temp will remain constant thru the night, the winds are expected to reach NNW 25 kts by 08:00 and WNW 40 kts with gusts over 60 kts by 17:00 on Monday. The wind generator is humming!!

Inside, Dolphin is a toasty warm 68 degrees. I’ve just pulled banana bread out of the oven in anticipation of a simple breakfast tomorrow morning as winds start to pick up.

We will do our best to keep you informed. I mentioned I took a video of the area from shore but can’t yet figure out how to load the large file. So stay tuned!

Thanks so much for all your well wishes and prayers! Our thoughts and prayers are with all of you as well. Be safe! Seems no one will escape Sandy’s wrath!
N&A

Stephenson’s Hardware selling storm supplies. Power outages are expected and happen with many storms they get!

The town dumped sand and shovels in the neighborhood on Saturday so people can fill their own sand bags in preparation for the anticipated storm surge, also a pretty regular occurrence.

Last night this waterfront bar was hop’in til last call at 1:45AM despite 15kt wind. Today they are closed and ready for Sandy. 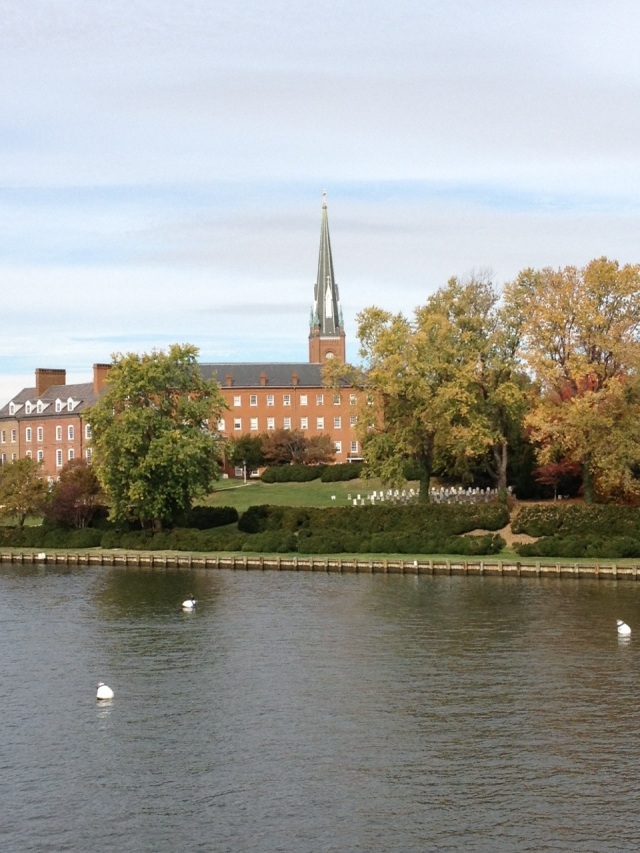 St Mary’s Church on Saturday AM

Inside St Mary’s where we have become frequent visitors! 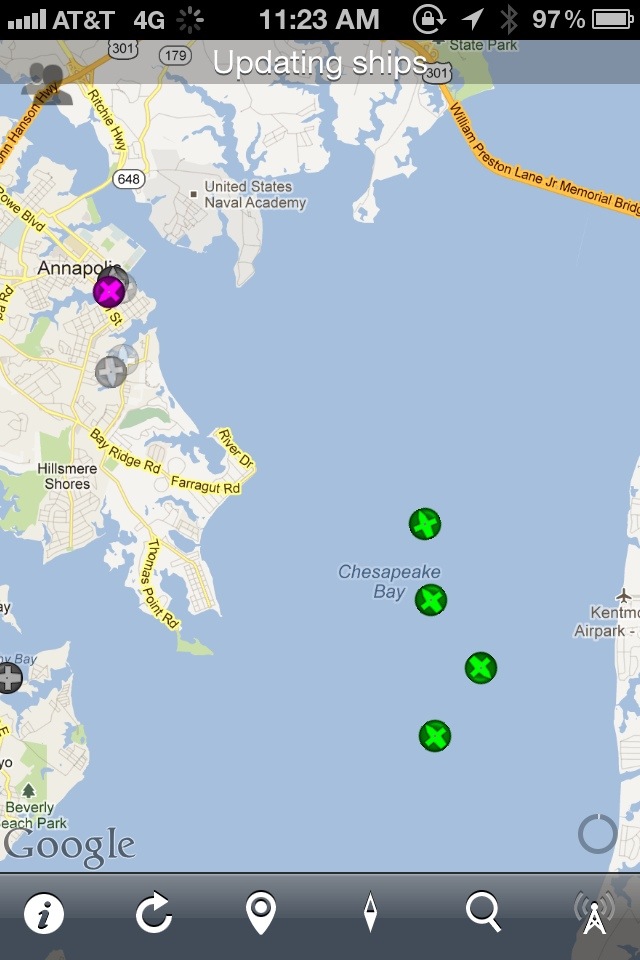 We are near the pink “x”. This gives you an idea of our location from a bigger prospect, the next zooms in a bit closer.

The upper right hand corner of this shot is the Navy football field. Dolphin is actually located at the red ball, not where the pin lands!