Posted on January 16, 2013 by ninarocksadrien

We could have stayed on the dock for another week, there is always something to work on but with Nina itching to get underway and fearful the cold weather would return, we left the dock on Saturday Jan 12th at noon. Plan “A” was to depart via Brunswick Inlet south of St Simon’s Island and head offshore to Cape Canaveral but as we rounded the first turn we saw a thick dense fog across the entrance to the canal. So on to Plan “B”! We entered the ICW North of Jekyll Island and enjoyed a comfortable motor ride past Cumberland Island. 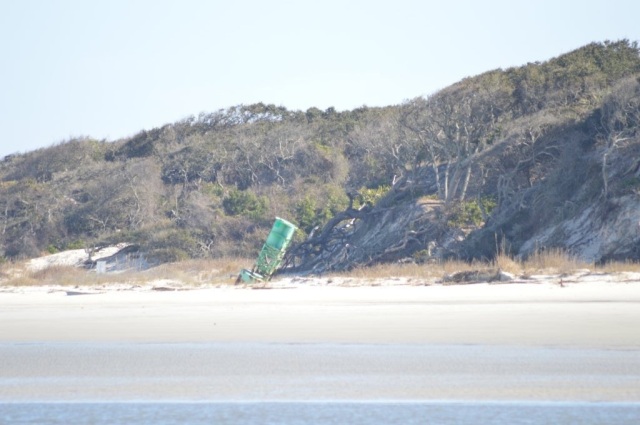 We decided to keep this buoy to Port!!

We anchored at dusk at the southern end of the Brickhill River and enjoyed a comfortable night. 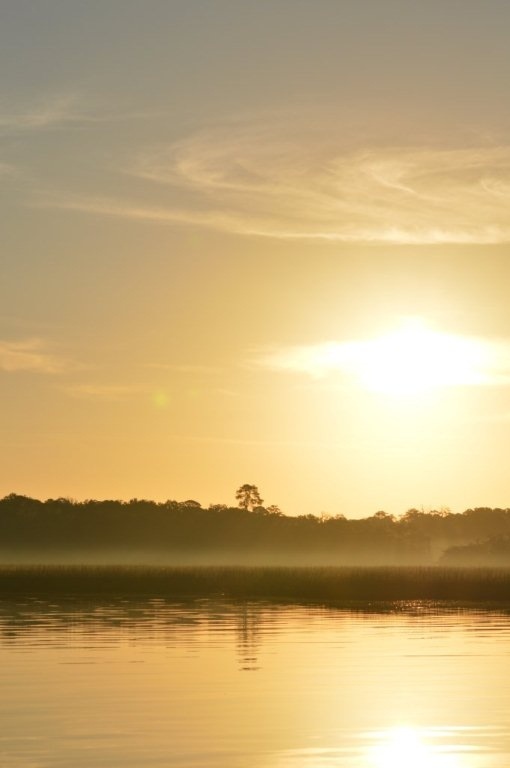 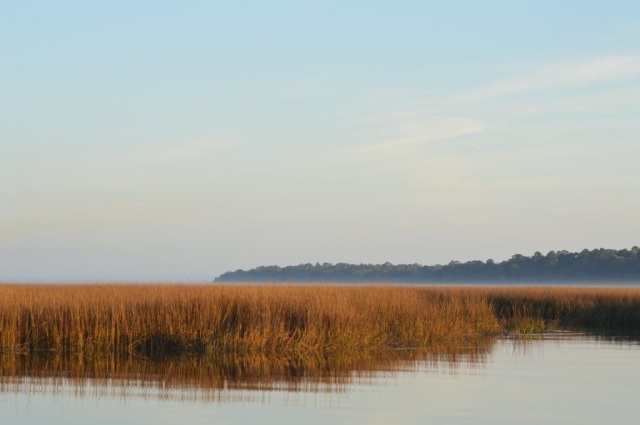 We continued on past the Trident Submarine Base at Kings Bay and down the St Mary’s River, leaving Amelia Island to starboard, out to the Atlantic Ocean.

We flew down St Mary’s River with a 2.5 kt current carrying us out to the Atlantic. We were met with a gentle 6-8 kt SE breeze and 3′ swells on our nose. It was a sunny warm day and comfortable. We followed the coastline easing out to a course of 165 degrees which brought us about 10 miles off shore.

With a long night ahead of us Adrien took the first shut eye while listening to the Pats game on his iphone and following texts from Pat’s fans at home. At the helm, Nina plugged into music and kept us on course.
The afternoon turned to dusk as we past Jacksonville.

As darkness set in the winds increased to 15kts and the swells became more intense. With all the rocking, rolling and yawing it became difficult to follow the GPS and compass so we used the FL coastal light and stars to guide us….until the fog set in and hid the coastal lights, and the clouded hid the stars, and the cockpit enclosure fogged up! We were forced to go back to following the GPS and compass. Thank goodness for the bag of ginger candies Nana packed in our travel bag!!

We continued to take 4 hour shifts and somehow we made it through the long night on course and were greeted with a beautiful sunrise! 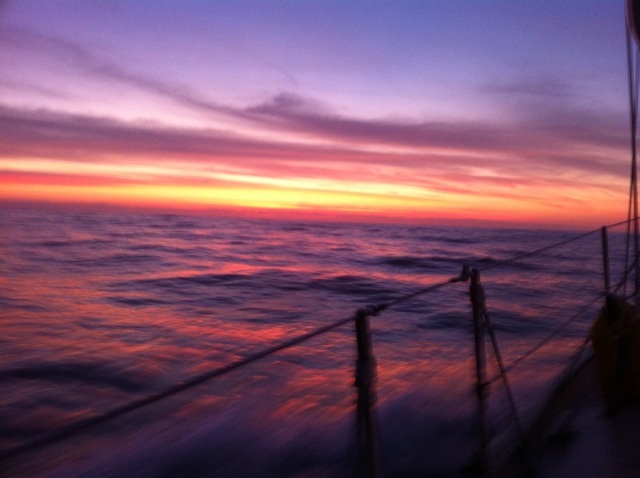 As the sun rose the wind died down and the swells subsided. It was tolerable again! We still couldn’t sail but we were both revitalized by the sun for the full day ahead of us. Cape Canaveral was still 13 hours away! Our ETA to the outer entrance of the channel was 20:30 PM! With an additional 10 miles to the marina, ETA at the dock would be about 23:30!

We continued to take shifts throughout the day as we rolled down the coast averaging about 5 kts. We kept a lookout for Right whales (prevalent and protected in northern FL) and were entertained by several pods of playful dolphin and a lonely Loggerhead turtle. We saw only a few other vessels and none near our path. It was a long comfortable day. The sun set as we passed Kennedy Space Center.

As we approached the channel entrance the swells were growing again and hitting us abeam, but the last leg was short, the channel well lit and we made it to the dock as anticipated at about 22:30. A stiff drink in hand and a walk around the the beautiful Ocean Club Marina to stretch our legs and we were ready for a good nights sleep! We’d traveled 173 miles over 36.5 hours! Glad that is behind us!!!

1 Response to Brunswick to Cape Canaveral