After the blow and lengthy stay in Wardwick Wells, it was time to move on. Several of our friends took an eastern pass to Georgetown, another couple of boats headed north to the Eleuthra’s and Que Sera Sera, Lauren and Brian are the fellow Bostonians we met in Brunswick, joined us to sail a few miles south to Big Major’s Spot. We’d been looking forward to seeing the swimming pigs this Cay is known for and the three big pigs did not disappoint! As boats would approach the beach the pigs would swim out to greet them, grunting all the way with their snouts just above the water line, hoping for food scraps and handouts . Sometimes they would get aggressive and try to climb in to the small inflatables or fiberglass tenders. We spoke with one gentleman who was actually bit on the butt by a pig! Fortunately it tore his shirt, but not his skin or the dinghy!

This area was well protected from Easterly winds and offered 4 nice beaches close by as well as several coral caves and coral heads to snorkel and explore. One of the beaches , “Pirates Beach” , had all sorts of games , tables, beach chairs, fire pit, several barbecue grills, picnic benches…. even a Porta-Potty that could be shrouded by beach towels for privacy ! All these items were donated and left by Cruisers. We played horseshoes, bean bag toss, and relaxed in the chairs in the shade; even planned and held a formal Happy Hour by calling all nearby boats on the VHF radio.

We snorkeled the infamous Thunderball Grotto, ( as seen in the James Bond movie, Thunderball), diving under water to reach the cavernous opening filled with many fish. We , visited nearby Staniel Cay by dink and did some sightseeing and provisioning.

Speaking of provisioning….it’s not what you would think. Most of the “grocery stores” in the Exuma’s get deliveries from Nassau about once a week via the mail boat. They maintain just a few sparsely stocked shelves. (Locals get their own deliveries from family also from Nassau and use these markets as we might use a 7/11, for the bare essentials if the mail boat is delayed. ) i usually see butter, eggs, maybe cream cheese, pasta, brown rice, Mac n’cheese, a few types of canned vege’s and beef stew, a few fresh vegetables like celery, red & green cabbage, green tomatoes, green peppers, carrots, onions and various potatoes. If they have chips they could run $8/ bag! Occasionally I’ll find iceberg lettuce and rarely romaine. Some stores may carry frozen chicken legs, pork chops and hamburger in tubes…..that’s about it! Boy do I miss yogurt! But my provisions are holding out well and we’re getting creative.

We have a new fondness for red cabbage salad, potatoes, egg salad and tuna. I’m enjoying comparing recipes with other Admiral’s (usually the chefs) and learning new ones. We haven’t written much about what we’ve been eating because we’re still in catch up mode, and frankly, can’t remember that far back. We often share meals with those we are traveling with and eat on each others boats. Everyone contributes what we can to round out a meal. We had a delicious dinner on Que Sera Sera the other night. Lauren cooked Italian sausage, stuffed it with mozzarella cheese, wrapped it in Lasagna noodles and toped it with a flavorful homemade pasta sauce, Delicious!

And next to nothing goes to waste. If there are leftovers, they are quickly repurposed for the next meal, ie a side dish of hot quinoa last night becomes a cold salad the next day for lunch by adding some chopped fresh vegetables and whipping up a fresh vinegarette. And improvising is the name of the game! If you want to follow a recipe, forget it…you’ll never have exactly what’s called for…so getting creative with substitutes is a necessity! I never realized how spoiled I was at home. If I didn’t have an ingredient, Adrien or I would run to the store to get it, or it didn’t get made! Ok, Ok, you probably already knew all this but it was news to me !! More on food later!

At Staniel Cay Yacht Club we saw over 15 large Brown Nurse Sharks along the boat slips. The local fisherman drop chum on the water to attract the sharks. When the sharks come in to snack they are followed by smaller fish that swim under the sharks. The fishermen drop a bated hook and quickly nab the smaller fish which they use for bait when they head out for bigger game fish. I don’t think I’ll be swimming in there waters!

Another Cold Front was predicted, winds supposedly coming out of the North, we and about 50 others that sought refuge in the mooring field thought we’d be well protected. Unfortunately the wind came out of the west for a portion of time and it was a very uncomfortable night with lots of rocking and rolling! Two boats lost their dinks and they crashed into the rocky shore. One of them was destroyed; my friend Brian and I rescued the brand new 10 hp 4stoke Outboard Motor that was lying in 3ft of water.

Brian and Adrien did some snorkeling, he speared a Lobster, but it got away. We did land several Squirrel Fish and they ultimately made a great meal. While the guys dove, Lauren and Nina did some beach walking for sea glass and shells and made another pass to see the pigs! They are just so darn cute!

One if my favorite pictures!

Looking North across the mooring field to Fowl Cay, an exclusive all inclusive resort that runs $10k a week for a one bedroom villa….but they are beautiful!

We won’t be swimming here but some visitors are know to swim with them. Nurse sharks aren’t interested in humans. 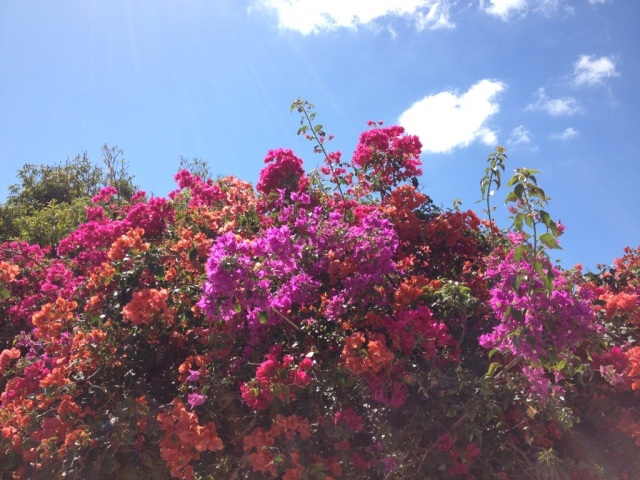 Colorful Flora, will plug in the name when I find out! 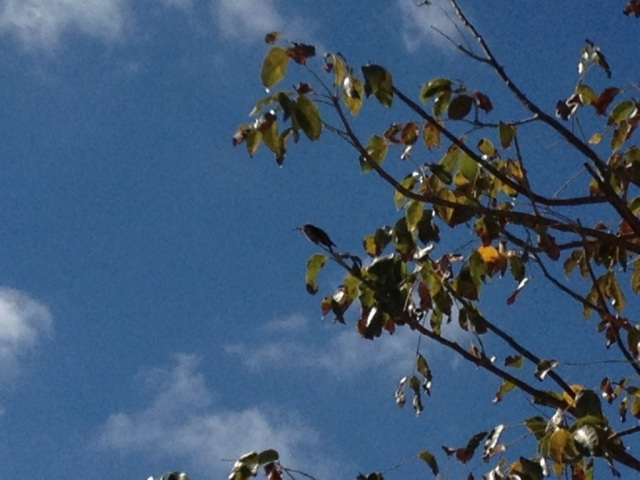 See the Humming Bird at the tip of the lowest branch? 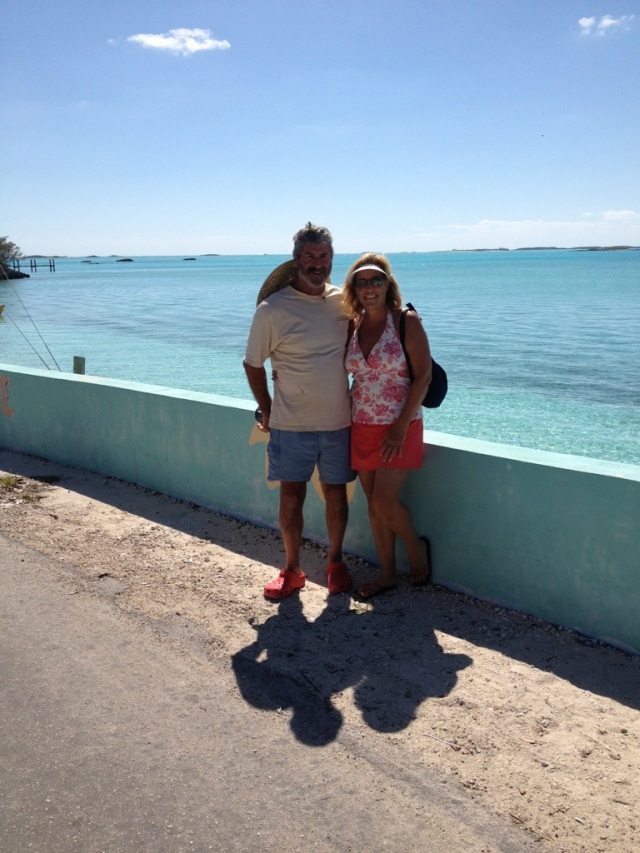 On a walk to the general store 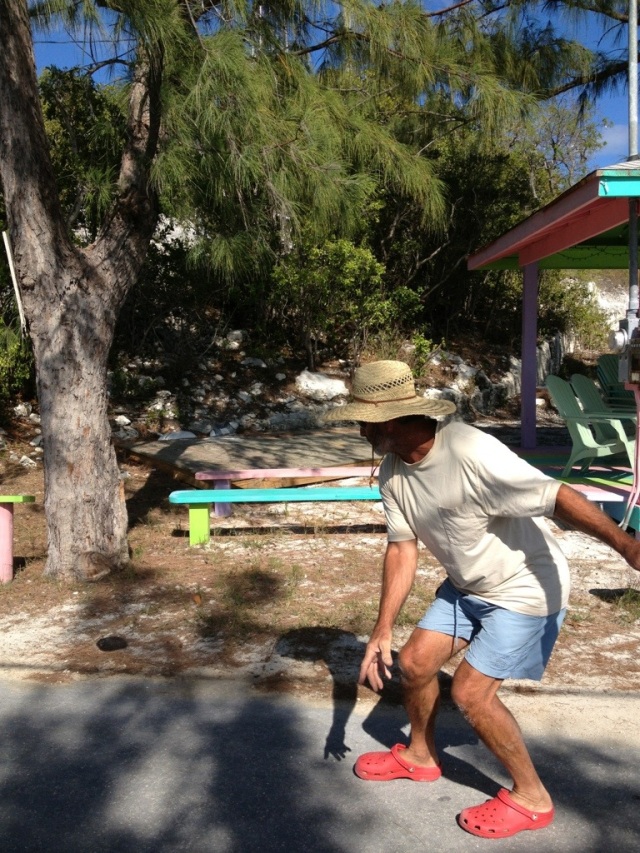 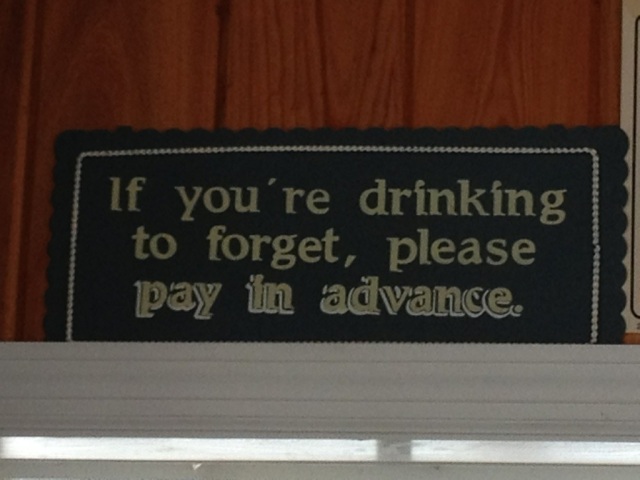 Sentiments at a small watering hole! 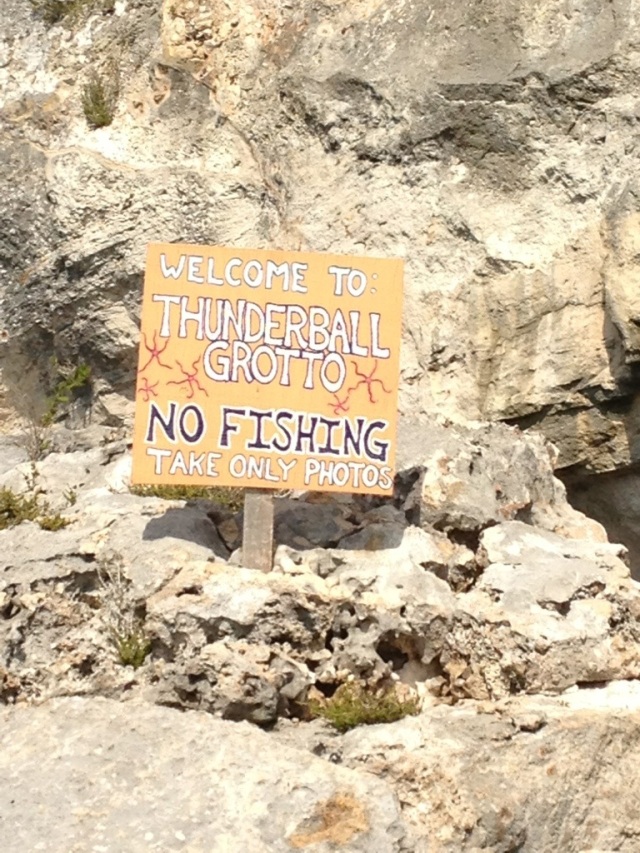 Outside the Grotto. We visited at slack high tide to avoid being pulled by the current but it was too difficult to get a camera inside to show this cool spot! 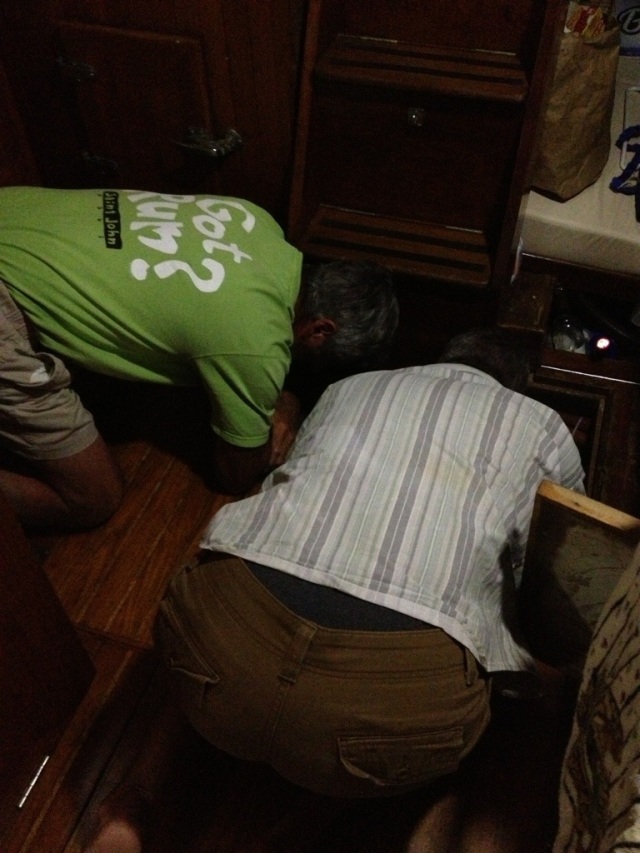 When there is a problem, two heads in the bilge is better than one! Everyone helps each other, and as you might suspect Adrien is VERY helpful!!

A proud resume for Staniel Cay!

We never miss a Happy Hour! 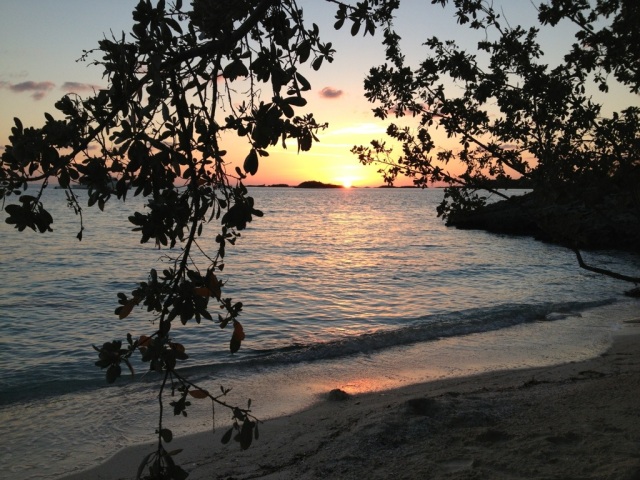